Counter Culture will use a 'lifeways' approach to studying Neolithic social diversity. This involves building a biography for individuals in the past by combining bioarchaeology evidence, with funerary rites. New isotopic data will be examined within the context of the high resolution chronology from Alsace based on the bayesian modelling of radiocarbon dates.

By comparing the strontium (Sr) isotope ratios found in teeth to those from the local environment (e.g. plants, soils, rocks and rivers), it is possible to determine whether an individual moved over their lifetime. Up to and including adolescence, each tooth mineralises over several years. Standard sampling methods retrieve the average Sr isotopic ratio from the enamel over this period. Advances in mass-spectrometry, coupled with the introduction of a laser ablation system, now allows for high resolution sampling down to <100μm spots, or even of continuous profiles. Tooth enamel is laid down sequentially from the cusp (the top of the tooth) to the cervix, at the gum line. Determining how Sr isotopic ratios rise and fall along this transect provides a more refined record of mobility. Accurately tying these sequences to time in calendar years or seasons is not yet possible, but—significantly for this project—it will allow for more refined comparisons between individuals over the time the tooth was forming. Hence, greater detail about the variety of mobility patterns practised is accessible. Rigorous interpretation requires the layering of different sources of evidence together, carefully assessing the conclusions against different mobility models. When tied to details from the skeleton and the burial rites, Sr informs on who within a community was moving during their childhood and early adolescence, and whether this included a geologically different area to their place of burial. 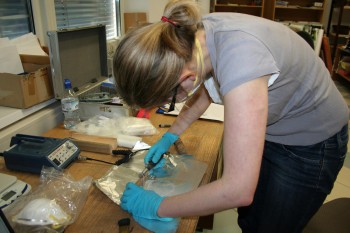 You are what you eat. Comparing carbon (δ13C) and nitrogen (δ15N) isotopes in human bone collagen allows assessment of the relative importance of plant and animal foods in the diet. Bone continuously forms throughout life and, depending on the skeletal-element sampled, reflects diet in the ten to 20 years before an individual’s death. Previous analysis on the Early Neolithic, has demonstrated a relatively homogenous diet amongst the earliest farmers. Yet some of the largest differences were found in the Alsace region, particularly in terms of non-sexed diversity, which remain to be adequately explained, but could indicate differential access to meat or fish.

Dental calculus or tartar is becoming an increasingly important line of evidence in Archaeology, as it potentially retains a wealth of information on diet and health. It preserves from very deep into the human past, from the Lower Palaeolithic. While most studies on human dental calculus have focused on dietary remains (e.g. starch granules, plant phytoliths) entombed in its matrix, recent work conducted at BioArCh, UoY, has shown that dental calculus can also entrap particles of non-dietary origin, from micro-charcoal to pollen, to fibres (e.g. nettle and hemp), and even non-indigenous food items. Such microfossils can provide unique insights regarding the natural and built environments directly experienced by people during life, and when combined with osteaoarchaeological data such as sex and age they may even provide insights into division of labour.